There is no doubt this weekend battalions of J.R.R. Tolkien fans combined with Peter Jackson’s fandom will march united towards the Box Office as The Hobbit an Unexpected Journey will have its so awaited theatrical release around the globe on Dec. 14th.   I was lucky to get a single pass for the promo screening in Vancouver and also won one of the 3  swag bags that were given before the movie started! I felt the luckiest person in the world.

As for the Peter Jackson’s first installment of what’s going to be another trilogy? I could only say The Hobbit was everything I expected and more. There was action, adventure, As many  SFXs as stars in the sky and of course some of those great ad beloved magical characters we admired on the LOTR trilogy like Gandalf the Grey, Lord Elron (Hugo Weaving) Lady Galadriel (Cate Blanchett) Saruman (Christopher Lee) Gollum (Andy Serkis) and so on.

The story begins not like the book but in a different way which is perfect to give continuity to all Peter Jackson’s films: it starts right before Bilbo Baggins’ (Ian Holm)  birthday party, he’s giving instructions to Frodo and telling family stories and remembering his adventures and so The Hobbit an Unexpected Journey begins to be told as  a flashback as  Gandalf arrives to  Bilbo’s (now Martin Freeman) home inviting him to join an adventure with the dwarves who are looking to reclaim their treasure and home stolen by the dragon Smaug, back at the  Lonely Mountain. Reluctantly Bilbo decides to join the adventure and so the journey begins. We see as in the book Bilbo bumps into the 3 trolls in the forest, and how he gets the ring from Gollum.

What did I liked the most about the film? the trolls, the goblin’s caves, the giant stones, but most of all Radagast the Brown (Sylvester McCoy) and his rabbit sled! This character, Radagast is not in the Hobbit and it’s only briefly mentioned in the LOTR but Peter Jackson’s decided to create an entire sequence that seems to be more like a resource of more action/adventure that really stands by its own rather than for story telling reasons. It still works if you ask me. 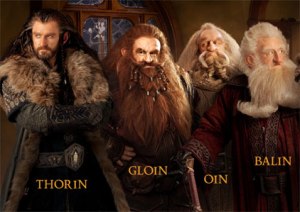 Who are the dwarves in the story? well there are all important but Thorin (played by Richard Armitage) must be taken special attention as he is the son of the dwarves’ king and one of the few survivors of the kingdom. The rest of the crew are:

Gloin (Peter Hambleton, he also plays the voice of William Troll one of the 3 trolls who wanted to eat the dwarves and Bilbo) 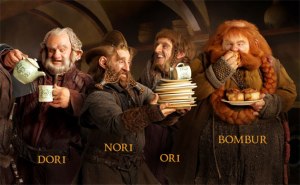 and last but not least adorable Bombur (Stephen Hunter) and his food passion.

Continuing with the differences, the council meeting among Lady Galadriel, Lord Elron, Saruman and Gandalf the Grey is also not part of the book, as the book is written in Bilbo’s Point of View but I think PJ took the right decision on adding this sequence as we can see how evil is building for the LOTR trilogy.

I loved, since I saw the trailer, the Dwarves’ song called “Misty Mountains”  but in the book there are more memorable songs one from the Elves welcoming the dwarves, Gandalf and Bilbo to Rivendell, and the goblin’s songs are also gone.

Last, another moments that loved from the “The Hobbit…” were Bilbo and Gollum’s riddle duel  and the stone’s giants fight.

It was very beautiful as a film fan, film critic and Mexican to watch in the script writing credits the name of Guillermo Del Toro. I remember his first film that won at Cannes  “Cronos“(1993) this kind of fantasy universe is without a doubt his style.

As for the technical review:  The Hobbit was shot with the 48fps HFR Red Epic Camera which would mark a revolution in the film industry as all the movies since the early 20s were shot in 24fps. My opinion: after watching the film actually I felt in some scenes like I was watching a TV scene. it doesn’t look that “cinematic” as it would be in celluloid film. A lot of texture were lost and at some point, specially in the daylight scenes it was a bit over lighted, but that was my humble opinion.  Now for watching a 48fps version of The Hobbit you would have to ask the staff at the theater which version are they offering? also whenever the DVD might go out on sale you will not see it in real 48 fps unless you have an upgraded DVD player. Honestly I don’t know how this will work out. But at least for 3D Digital film I see some improvements but also some failures or should we say that something was left behind? anyways you’ll be the judge of that. But disregarding those technicisms The Hobbit is still an awesome film to watch!

One response to “The Hobbit an Unexpected Journey”