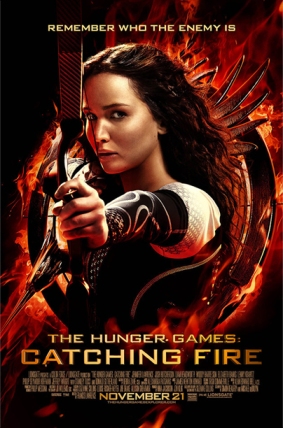 I confess haven’t read the Hunger Games books but after the second movie I’m hooked up. There are so many things that were left in the air because of time, that I just started to read the first book. For those who are planning to watch Catching Fire, I recommend to watch first The Hunger Games (2012) or you’ll be a little lost. Which by the way, happened to a friend who came with me to watch the film. After I did explain a little bit of the plot of the first movie, it made more sense to her.

So, what’s going on with the second film? Catching Fire picks up the story exactly where it was left in the first installment. Katniss (Jennifer Lawrence) & Peeta (Josh Hutcherson) have to go on a winner’s tour among the districts. Soon she finds out that signs of what could be a rebellion everywhere they go.

She also acknowledges that the game Peeta and her started is like the little pebbles that becomes an avalanche.

Katniss is now seen as a sign that something can be done and changed among the districts; but the people in charge at the Capital have meaner games to play with her. Soon she finds out she has to come back to the arena as the next Hunger Games tributes will be chosen among the past winners this time. She is the only female winner alive in her district. Katniss is scared.

In her private life Katniss has to deal with what she feels with Peeta inside and outside the arena. Also Gale fights for her affection, which makes things a bit more difficult for her.

Back in the arena is yet again another brutal battle to death but with this time the Hunger Games makers also set up meaner mortal traps in the arena, to make sure no one survives perhaps.

The film is all about character development as well as setting up the final installment of the book trilogy: Mocking which will be break into two movies: Mockingjay Part I and Part 2.

Catching Fire is all about developing the story and the characters, so we see Katniss fighting internal battles about whom and what to believe while Peeta struggles and fights for Katniss’ love as this time is for real.