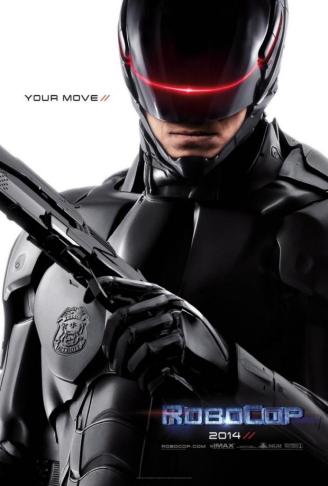 I wouldn’t consider Robocop a reboot, but a remake from the original 1987 film written by Edward Neumeier, Michael Miner and directed by Paul Verhoeven. The story is the same, the same plot points, but the details are the ones who changed. I wanted to see this remake mostly motivated by feeling of the nostalgia marketing rather than anything else, and I would say it was as entertaining as the original.

The story follows officer Murphy and his partner who are both investigating several suspects related with organized crime and drug dealing. Omnicorp is a very powerful corporation trying to get their robots in the streets to replace policemen in the city of Detroit. When Murphy is almost killed by the  group he was investigating, he becomes the first Robocop: Mostly robot and partly human.

Although the story line is the same, both are equally impressive in their own terms, and of course there are some differences.

The original diverges in crucial points as it is more a story where the developing themes refers more to social concerns rather than character driven as it is on the 2014 film directed by Brazilian director Jose Padilha.

In the original Alex Murphy (Peter Weller) actually dies, and he is brought back to life thanks to the magic of computers becoming the first cyborg, while in the 2014 remake Murphy (Joel Kinnaman) he is badly injured, but survives

While the original is focused on social and economic problems involving the city of Detroit, the remake is all about a corporation getting their “product” on American soil. In order to do that they decide going for a partly human “robot” or cyborg while in the original the decision is made after the malfunction of one of the testing robots after accidentally killing one of the company shareholders. In other words, it was just a matter of safety issues.

In this version, a dystopian futuristic Detroit, the main plot point revolts about Raymond Sellars’s OmniCorp CEO and his efforts to get his agenda done: to put their robots on the street replacing police and army, something already done by the U.S. government in other countries but Omnicorp craves for the U.S. Market as it is the most profitable. The only way to achieve this is by changing the law but senators wouldn’t approve so they aim to the public opinion creating a cyborg. They look for the ideal candidate, in this case agent Alex Murphy is mentally stable enough to get his body dismembered and replaced by cybernetic parts and software.

In the original story as Alex Muphy actually dies, and then he’s brought back as a cyborg, he doesn’t remember his past life, but he eventually begins to remember his wife and kid, while in this new version, he does remember his wife and kid but he’s reluctant about his future life as a family as they don’t know the conditions he’s in now. His wife has more presence in this version, and the story focuses on their struggle to survive as a family. And also Murphy’s struggle to remain human.

Starring Robocop (2014) are the Gary Oldman as Dr. Dennet Norton, Michael Keaton as Raymond Sellars, the CEO of Omnicorp