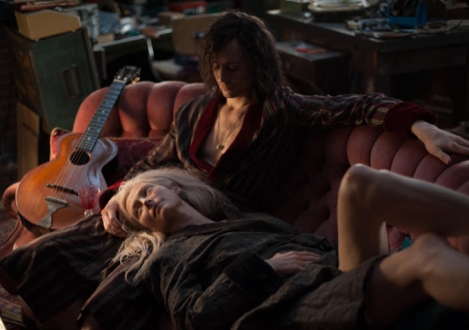 I just saw “Only Lovers Left Alive” and it blew me off. Like the good wines, every year Jim Jarmusch gets better. This is one of those movies that you just want to watch again after finishing it. A cult classic already! and one of my favorite films of 2014. Did I mention is a vampire movie?

The story looks simple on the first sight but it has a lot going on. The time is the present, but for Adam (Tom Hiddleston) and Eve (Tilda Swinton) the time is always as they are an old couple of vampires. Adam is a musician/scientific/romantic snob who loves life in solitude but he is also depressed about how the world has turned out; specially humans whom he looks in contempt and calls them zombies. Eve is more grounded but enjoys literature. She lives in Tangier surrounded by tons of books written in all languages and published all times. She also lives near by her dear friend Marlowe (John Hurt) a vampire who seems to be dying probably by blood poisoning.

Adam and Eve are married several times through time, hence their intimacy is so deep they can be miles apart but still be together, as we can guess on the first sequence, they are connected. Adam is in Detroit while Eve lives in Tangier. They both despite humankind (as good vampires) but lately Adam has been more depressed than ever as humans have polluted the entire world to the point their blood is also poisoned along with water and food. This is the reason they got more sophisticated to get their drinks and look among the Health industry instead of drinking blood from the first unfortunate soul who cross they way. Eve figures out Adam is so depressed she decides lo leave her little paradise in Tangier and help him work out his issues. Adam simply needs her by his side. After being reunited, Adam is back at peace again at least for a moment, but happiness is disrupted by an unexpected guest: Eva’s little sister Ava (Mia Wasikowska). She is capricious and energetic vampire, qualities they don’t share. She just arrives to create chaos on their pleasant little vampire paradise they worked so hard to create and sustain.

“Only Lovers Left Alive” It’s not much about the story but the characters. Jarmusch manages to create this universe dissecting every single moment in their lives and expose it to the maximum potential. Each detail on screen goes right exactly to the point: who the character is? What does he or she wants? How will he/she will get it? It’s so meticulously done that by the middle of the movie you don’t know all the details yet you feel you know the characters so well, but at the same time, they keep that mysterious aura around themselves which works perfectly as they are vampires. Jarmusch achieves the same atmosphere than the Swedish vampire film “Let the right one in” but of course in Jarmusch terms. Both extremely beautifully, elegantly shot, both with great atmosphere. Also I loved Jarmusch homage to the beat culture like Ginsberg, Burroughs, when he creates a story of vampires pretending to be junkies pretending to be vampires. How avant Garde! At least for Ian(Anton Yelchin), that’s what they are. As he was hired by Adam to get all his little trinkets, never ask questions and become his little Igor, his facilitator, his gopher. He never can ask questions and he only meets him at night to deliver the errands. A good gopher! at least until Ava gets around.

Ava is a threat to Adam and Eve in so many ways, no wonder they want her as far away as possible from them. She is reckless, she takes (or in her case drinks) what she wants whenever she wants, however she wants. There’s just no limits and no respect for someone else’s grounds, or measure the consequences of her acts even if it is her own sister. She is just a pixie vampire who thinks the world is at her feet. Eve realizes about it but try to keep up the good attitude and makes an effort when she tells Adam: “it is always a little weird with family” Although Adam knows that Eve’s presence will just ruin everything. Both know that for their relationship is no good, but they are willing to try. Problem is, Ava hasn’t change a bit in all these years they’ve been separated, as she keeps doing her same shenanigans.

On the second act, and please stop if you haven’t seen the movie. They finally get rid of Ava but that puts them right off the chart and ready for the final chapter as Ava drinks Ian with serious consequences considering they are now in the XXI century and killing people for blood is not an option anymore. There’s more surveillance and everything is more noticeable than several centuries ago. So Adam and Eve get rid of Ava and run away to Tangier. This is the turning point that makes also a great change of air for the film as they back together as they started: trying to figure out their issues as a couple and as vampires. As soon as they arrive they find something is wrong as Marlowe’s not answering the phone and they’re famished for the long trip. Alone and completely fried, they drag themselves to Marlowe’s coffee shop hiding place “Le mile et une nuits” (as Jarmush describes it’s an homage to the coffee shop Burrroughs, Ginsberg and the beat poets used to go) and that’s the place where our good old vampire Marlowe dies surrounded by his beloved servant, friend and family and with his best friends: Adam and Eve.

The rest is story and they wander around in the desolated frightening streets of Tangier at night, until they find what they need just to keep on going. It kind of keeps you craving for more adventures but probably that’s the point of this ending. It’s just sublime. It’s like a little window to the world of a good vampire story.