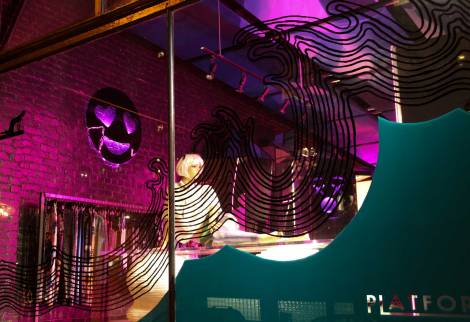 Clothing designer and entrepreneur Dave Briker has now launched PLATFORM, his unique take on the boutique experience. The store will act as both a base for the owner’s own lines as well as several international brands retailed exclusively in-store. Located at 430 Homer, and housed within a historic downtown building, the space has undergone extensive renovations to create a modern environment that feels fresh and other-worldly.

“The internet has shifted the retail landscape dramatically over the last few years”, says owner and creative director Dave Briker, “So much shopping happens online now, I wanted to create a place that was a reaction to that, a space that creates a genuine experience the minute you walk through the door”

Taking cues from influential boutiques of the past, like BIBA and Vivienne Westwood’s World’s End, the store aims to transport shoppers as they enter the space. The design was a collaboration between Dave and his brother, architect Dan Briker who sought to create a visually rich environment blending a sleek sci-fi look with a dark and modern feel. The store is adorned with bespoke fixtures such as stackable topographic tables, reminiscent of Korova Milk Bar in Clockwork Orange, and custom-built crystal shaped mirrored change rooms. Surfaces are both frenetic and calm, as bold graphics on the the walls and ceilings are strikingly contrasted with rare and dark original prints by Japanese artist Toshio Saeki.

The product mix for PLATFORM brings together a wide selection of brands, in-store exclusive, home furnishing, and collaborations hand-picked for the space. Briker’s own lines, Some Product and Le Monde Gris, will sit alongside a selection of international brands including: Coco & Breezy sunglasses, Cast and Combed(LA), Assembly (NYC), Skim Milk and more. In addition, the store is partnering with MyCommunitee to provide a service for custom small batch t-shirts orders, leggings, pillows, and more.

“I’m really excited to unveil this project”, continues Briker,”Working in the industry for the past 15 years has taken me to a lot of international fashion destinations and I’ve experienced a lot of great boutique retail. It has been an ambition of mine for a long time to develop a space like this in Vancouver. I think it’s time”

About Dave Briker
Immersed in Vancouver’s vibrant music, art and fashion scene for years, Dave Briker is a designer and creative director who heads up several long standing Vancouver based clothing brands. His Some Product Apparel line was established in 2003 and quickly became a popular cult brand. Specializing in exclusive designs, graphic tees and printed leggings, the label is sold in select stores worldwide and has been championed by a diverse group of fashionistas, including Miley Cyrus. In 2012, Briker launched a tailored menswear line, Le Monde Gris. Fusing traditional men’s styling with an avant-garde approach creating a collection of shirts, knits and jackets in a higher but still accessible price point. PLATFORM is Briker’s first venture into the world of brick and mortar retail.