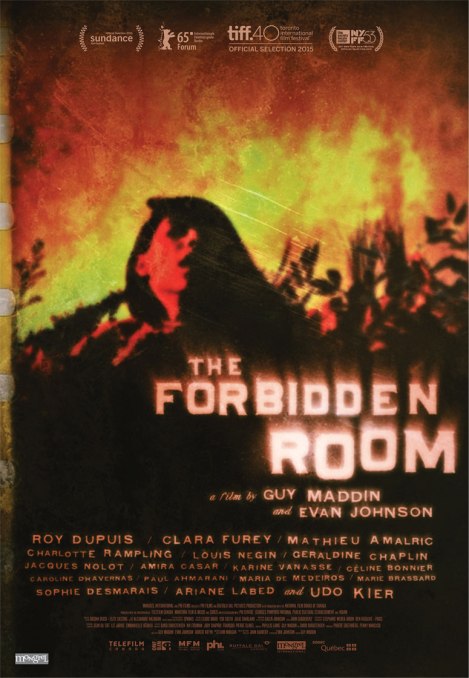 Mixing title cards with an onslaught of images and sound, The Forbidden Room honours old cinema (think 1920s) yet electrocutes
it with energy. This all adds up to a kaleidoscopic trip by Guy Maddin and his co-director/protégé/fellow Winnipegger Evan Johnson.

As usual with Maddin, the cast is great – Roy Dupuis, Charlotte Rampling, Geraldine Chaplin, Udo Kier, longtime muse Louis Negin (and more!) as a cavalcade of misfits, thieves and lovers. But there are a couple of twists – the film was shot in color and in public studios, where anyone could watch. Better seen than described, the narrative kicks off with a doomed submarine crew chewing flapjacks to access oxygen from the air holes within…and so it goes.

Script is by Maddin, Johnson and Robert Kotyk. Delightful prologue “How to Take a Bath” is written by master poet John Ashbery. The film is a
PHI Films Buffalo Gal Pictures production in co-production with the NFB.

If Canadian wunderkind Guy Maddin (MY WINNIPEG, THE SADDEST MUSIC IN THE WORLD) is Winnipeg’s own living film legend, THE FORBIDDEN ROOM is his ultimate epic phantasmagoria. Honoring classic cinema while electrocuting it with energy, this Russian nesting doll of a film begins (after a prologue on how to take a bath) with the crew of a doomed submarine chewing flapjacks in a desperate attempt to breathe the oxygen within. Suddenly, impossibly, a lost woodsman wanders into their company and tells his tale of escaping from a fearsome clan of cave dwellers. From here, Maddin takes us high into the air, around the world, and into dreamscapes, spinning tales of amnesia, captivity, deception and murder, skeleton women and vampire bananas. Playing like some glorious meeting between Italo Calvino, Sergei Eisenstein and a perverted six year-old child, THE FORBIDDEN ROOM is Maddin’s grand ode to lost cinema. Co-directed by Maddin’s long-time collaborator Evan Johnson and created with the help of master poet John Ashberry, the film features Mathieu Amalric, Udo Kier, Charlotte Rampling, Geraldine Chaplin, Roy Dupuis, Clara Furey, Louis Negin, Maria de Medeiros, Jacques Nolot, Adèle Haenel, Amira Casar & Elina Löwensohn as a cavalcade of misfits, thieves and lovers, all joined in the joyful delirium of the kaleidoscopic viewing experience. 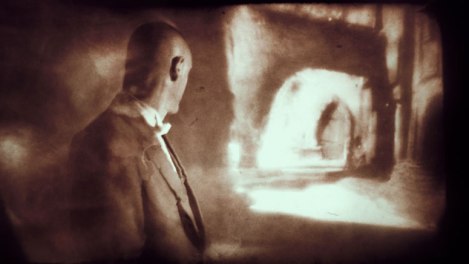 We just have too much narrative in our heads, so much we feel our brains are going to explode. With this film, we set out to create a controlled setting, an elaborate narrative network of subterranean locks, sluice gates, chambers, trap pipes, storm sewers and spelunking
caves where all the past, present and future films in our large heads might safely blow! Where no one will be hurt by the spectacular Two-Strip Technicolor havoc we’ll wreak on the screen, knowing the whole thing will drain away by credit roll. Stay safe and enjoy!”

Here’s a Press conference of Guy Maddin talking about the film at the New York Film Festival , 2015.